In this series I’ve been trying to demonstrate that the book of Acts works like a story. It has a tension that finds resolution at the end. In other words, it has a climactic conclusion. In these next two posts, I want to show that nested in the story of Acts is another story. It’s the story of Paul’s journey to Rome via Jerusalem. This story has its own tension and resolution while at the same time bringing the story of Acts to its climactic resolution. 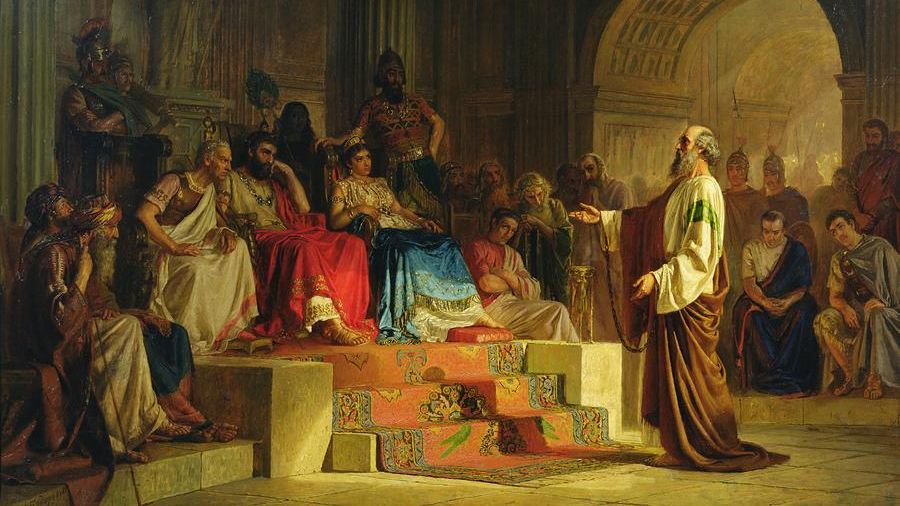 I Must Also See Rome!

So the word of the Lord continued to increase and prevail mightily.

This verse transitions us to a new section in the book. Actually, it sets up a story within a story. To see that, let’s take a look at the next verse (Acts 19:21).

Now after these events Paul resolved in the Spirit to pass through Macedonia and Achaia and go to Jerusalem, saying, “After I have been there, I must also see Rome.”

There’s something very interesting about this verse. In my post on the selection of Mathias I pointed out that Luke often uses the Greek word δει or “it is necessary” to signify something that must happen because God has ordained it to be so. When Paul says, “I must also see Rome” or “It is necessary for me to see Rome also,” he is using this word. God has foreordained that Paul will go to Rome to share the gospel there.

The Story at the End of the Story

Can you see how Luke has set in motion a new story with a new tension that requires resolution?

When we realize how Luke uses this word then Paul’s statement creates an expectation that needs to be satisfied. Paul must get to Rome because God has ordained it to be so. This sets a new story in motion where the sub-plot revolves around whether or not Paul gets to Rome. If we’re reading for story, then we’re going to pay close attention to whether or not Paul gets there, what stands in his way, and how he overcomes any obstacles.

The Intersection of Jerusalem and Rome

We’re going to leave the climactic conclusion, or the final battle, for the last post in this series. But let’s take a look at how the two plots–the story of Acts and the story of Paul’s journey to Rome, intersect.

Again and again in the second half of the book we watch as Paul goes to a new location, he preaches the gospel in the synagogue, the Jews reject him and his message, and the Gentiles receive it.

So we might say that what we have here is the rejection by the Jews and the acceptance by the Gentiles par excellence.

Let’s take a look at Paul in Jerusalem and leave Paul’s travels to Rome for the last post.

First off notice that the journey to Jerusalem is not all that smooth. On the way there the prophet Agabus even warns him not to go. He says that the Jews will bind him and hand him over to the Gentiles (Acts 21:11). This is foreboding and increases the tension of the story.

Once Paul does arrive in Jerusalem he is informed that there are some rumors spreading about him that he is teaching the Jews who live among the Gentiles to forsake Moses. Paul, therefore, follows the advice he is given and he goes with four other men to the temple in order to demonstrate that he is an observer of the law.

The plan backfires. Paul is falsely accused of taking Gentiles into the temple and defiling it. The people take hold of Paul, drag him out of the temple and they try to kill him. Fortunately, the officials rescue him and Paul is able to present his case before the crowd. His speech in Acts 22 is interesting.

In both cases, the testimony of Paul’s conversion is really about Paul’s call to take the gospel to the Gentiles. Notice that in Acts 9:15 when the Lord instructs Ananias to go heal Paul’s blindness he declares to Ananias, more or less at the beginning of the story, that

he [Paul] is a chosen instrument of mine to carry my name before the Gentiles and kings and the children of Israel.

Let’s turn to the Acts 22 testimony. Paul begins by pointing out his pedigree as a Jew who was trained “according to the strict manner of the law.” He’s trying to establish some common ground and defend against this idea that he’s against the law of Moses.

Next, notice that while the reason for Paul’s call to the Gentiles was reported close to the beginning in Acts 9, it is the very last thing that Paul says in his speech in Acts 22 (v 21).

And when the blood of Stephen your witness was being shed, I myself was standing by and approving and watching over the garments of those who killed him. And he said to me, ‘Go, for I will send you far away to the Gentiles.’

These are Paul’s last words because at this point it seems the crowd interrupts him (Acts 22:22),

Up to this word they listened to him. Then they raised their voices and said, “Away with such a fellow from the earth! For he should not be allowed to live.”

The Gospel Incarnate in Acts

The State of the Story

When reading a story, it’s always good to keep in mind just where we are in terms of the tension. Here at the end of Acts we have two related stories. When the story within the story is resolved, then the larger story will be resolved as well. Let’s look at where we are with these two stories.

First the story of Paul’s journey to Rome. It’s God’s plan for Paul to go to Rome. But there are some obstacles. For one, Paul is in chains. For another, the Jews want him dead. Those are actually two pretty big obstacles. Big obstacles make for more tension and a more exciting story. As we read on, we’ll find there are more obstacles and the tension reaches a peak on the way to Rome.

That’s point. If this is really God’s plan he’ll make sure it happens. If the tensions of the two stories are successfully resolved, then we can be convinced that God truly is behind this idea of the gospel to the ends of the earth.