You are here: Home / muse / How to Read a Story

In the last post I introduced this series on reading the book of Acts as a story, or, according to its plot. Even though everyone knows how to read a story we’re not used to reading the Bible that way and so in this post I’m going to offer Genesis 2:18-25 as an example of a short narrative text that has its own beginning, middle, and end. When we read the story of the creation of Eve according to its plot then we begin to see the connections between the events in the story. When we see the connections between the events we understand the significance of the story. 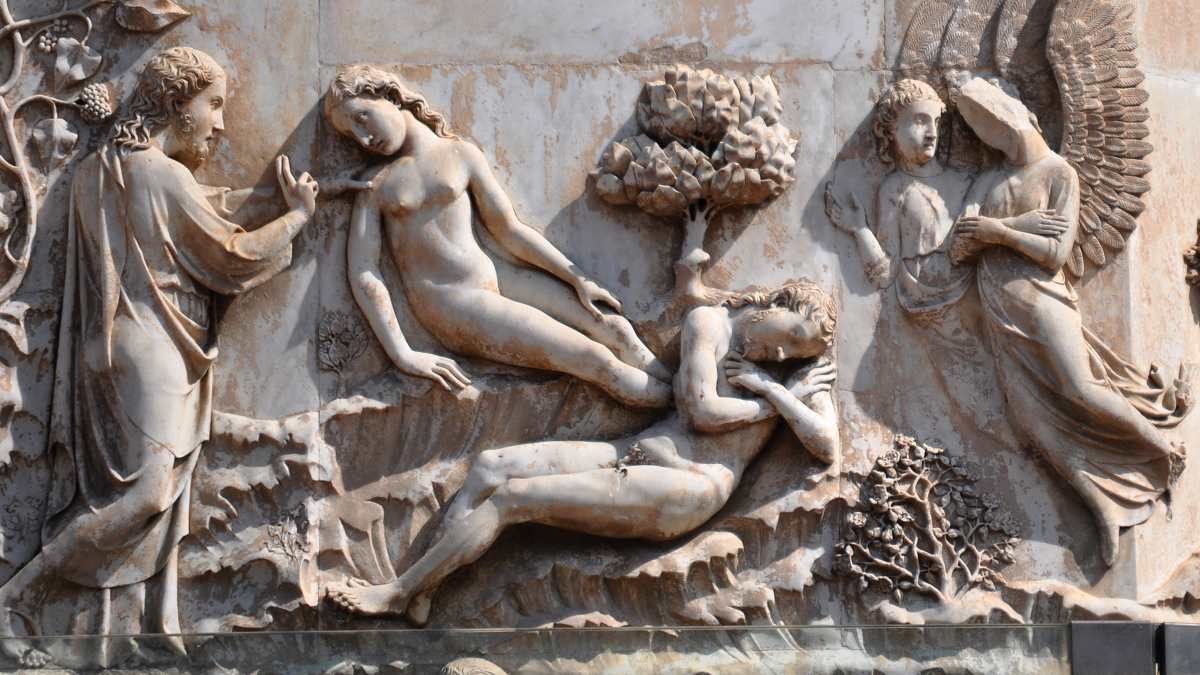 By way of review, remember that we read plots from tension to resolution; from beginning, to middle, to end.

If we follow this scheme for Gen 2:18-25 the first thing we need to identify is the tension that disturbs our initial peaceful state. We find a tension right away in verse 18. Do you see it? In order to catch the tension that arises in this verse you have to remember what we’ve just read in Genesis 1 and 2. In Genesis 1 God created the world in six days and on six different occasions God declared his creation to be “good.” On a seventh time he even said, “it is very good.”

In chapter two, starting in verse 4 we backtrack. Backtracking is a pretty common feature of Hebrew narrative. This time, the backtracking allows us a different perspective on creation. It’s kind of like bin-ocular vision or creation in stereo. In the first chapter we get a view of “El,” the transcendent God (“El” is the word for God used exclusively in chapter 1). It’s almost as if we are looking on the creation of the universe from somewhere in space. In chapter two the perspective changes; it’s more down to earth. Now God is “YHWH El.” YHWH is God as revealed to his people Israel (God present to bless, God in covenant with his people). When we peruse creation in chapter two we now seem to be passing through on a tour of the creation highlights. Things in chapter 2 are good, too (vv. 9 & 12).

With everything good in the world so far, when we get to verse 18 and we have in the mouth of God, “It is not good …,” we should be taken aback. How can God’s perfect creation be not-good? Something’s wrong and needs to be fixed! This is the tension of this little story. Things are not good and they need to somehow get back to a state of “good.”

If we’re going to read for plot, this is exactly the kind of tension we need to be aware of. We are going to pay attention to this tension from now through the rest of the story because in the movement from tension to resolution we’ll see how everything fits together and we’ll have a better idea what significance the author is giving this episode.

Right away in the rest of verse 18 we are told what is wrong (why “it is not good”) and we are told what needs to happen for it to be good again. What’s wrong? The man is alone. What’s the solution? God is going to make a helper suitable for him (the Hebrew for “suitable” is a little strange–it looks like a helper that is “like his opposite” or maybe “corresponding to him”). As we read the rest of the story we are looking for this one thing. God is going to make a helper suitable for the man. The question is, what is a “suitable helper?”

Notice what happens next in the narrative. God has made all the animals and he brings them before the man to see what he will call them. Does this have anything to do with the plot? You might think it doesn’t; that it’s just extra information that the author includes. Maybe he didn’t know where else to put it. Maybe it’s in chronological order. But if we’re reading for plot there is a reason it’s here and it’s connected to the making of a suitable helper.

By moving toward a resolution but failing to actually attain it, we learn more about the nature of the tension and just what is required to relieve it. In other words, the author is gradually shaping our idea of what it means to be a suitable helper.

In verses 21-22 we have the account of the actual creation of the woman. Unlike any of the animals, Eve is made of the very substance of the man. When the woman is presented to the man his response is the familiar but somewhat enigmatic, “This is now bone of my bones…” I think the best way to understand what the man says is to read it as the final climactic resolution to the tension of the plot. In other words,

This, of course, brings us full circle, resolving the tension and returning us to a peaceful state. Like in any good story (with a happy ending), the final state is something more than the initial state.

What Have We Gained?

What difference does it make to read for plot?

Actually, in a short story like this it might not make much difference at all. It’s fairly easy to track and there are other hints in the text that help us put everything together. In general, though, when we pay attention to plot we are better able to understand how the parts of the story fit together in the whole.

There are a couple of examples in this text. When God brings the animals before Adam we are inclined to wonder why this is recorded in the middle of the narrative of the creation of the woman. If we’re reading for plot, I think it makes a little more sense. When we read for plot we understand that the author is creating hope in the mind of the reader that a suitable helper will be found among the animals. The failure to do so heightens the tension and increases our focus on the suitable helper. That gives us a greater satisfaction when the suitable helper is found. Greater satisfaction translates into greater conviction that this is the right solution.

It’s kind of like finding a puzzle piece that comes so close to fitting properly that you think there’s a chance it just may be the right one. But when you find the real missing piece and put it in it’s place, you now see that this new piece really is the right fit. You have a greater sense of satisfaction when this happens than with other pieces of the puzzle that you get right on the first time.

This is more than mere aesthetic and more than just a good feeling. Caught up in the plot from the beginning is the question, “What is the suitable helper supposed to be like?” What makes the helper “suitable”? In other words the plot is the quest for a suitable helper and in the process of relieving the tension the author is teaching us something about what this suitable helper is like. From the naming of the animals we find out that the helper is not like the animals. In fact, because the narrative is in the shape of a story, it would be anticlimactic if the helper were not something much greater, something altogether different.

The climactic act of creating the woman does not disappoint. Even man is made from dirt but the woman is made from the side of the man. She is of the same substance. When the man sees her he cries out, “I found the missing piece! This is the one! This is bone of my bones! It is good!”

This at last is bone of my bones

and flesh of my flesh

she shall be called Woman

because she was taken out of man

It is good. If we read for plot we cannot help but notice that what the man is really saying is “It is good.” This is the resolution to the tension that arose at the beginning of the story. Now, though, we have “it is good” in the mouth of the man. In other words the man is agreeing with God that his creation order is good and right.

A statement of agreement, an exclamation of joy, a promise of provision and protection, and an expression of worship. When the man recognizes the goodness of the creation he recognizes the goodness of the creator. In that way, his exclamation of joy and his promise to live within his order is also an expression of worship to his great creator.

This is where we get to the real difference between reading for plot and reading chronicle or cause-effect explanation. This story isn’t about how the woman was created, nor is it about what happened when the woman was created. This story is all about the significance of the fact that the woman is a suitable helper for the man. It’s about how God has organized creation so that everything fits together perfectly in a proper order. She is special made, she is the missing piece. When we live according to this order…it is good. Which is why the man shall leave his father and mother … and they shall become one flesh.