You are here: Home / family / We Rattled Him, He Rattled Us (video) 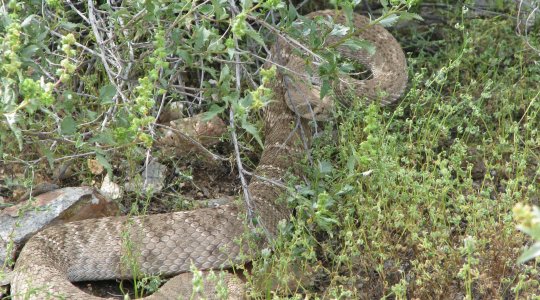 We took our first family vacation in a long time during spring break, enjoying a week with grandma Terry in Phoenix, AZ. Perhaps the highlights of the trip included our encounters with creation.

On Monday we went to a place called Out of Africa in Camp Verde, AZ. Out of Africa is a Wildlife Park where they try to build relationships with the wild animals (lions and tigers and bears–oh my). They don’t try to tame them or train them; instead they learn to understand them and interact with them as wild animals. Throughout the day they have several animal shows and a sort of safari ride. The animal shows include a tiger splash, where the animal handlers (they call themselves prey) get in a large enclosure with tigers and play with them. The best show was unscheduled. We happened by the bear exhibit when it was feeding time and that turned out to be the highlight of the day (see video above).

On our last day we hiked 4 miles in the McDowell Sonoran Preserve near Scottsdale with its Saguaro forests and beautiful desert wildflowers.

At the very beginning of the hike we were surprised by a very loud sound coming from the bushes near the trail. To this midwesterner it sounded an awful lot like a rattlesnake.   But an experienced hiker (judging from the gear) walked right by it and nothing happened so I thought we could keep going too. After going just 30 yards down the trail we ran into the experienced hiker again who informed us that someone from his party telephoned that they saw a rattlesnake cross the trail a little ways back.

It turns out the snake crossed the trail just moments after we walked by. When we got back to the spot the 3 foot snake was still crouching under a bush 10 feet from the trail so I was able to snap these photos. I wonder how close we were when it rattled. Actually, I wonder how close the neurons that signal for a strike came to firing in its brain.