You are here: Home / ministry / The Power of Presence 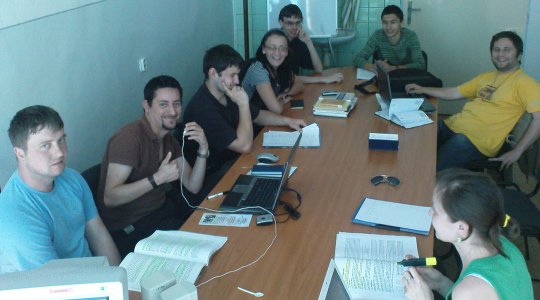 This last Saturday I was invited by a friend to attend the Cubs-Reds game.  Wow!  What seats!  I think we were just 6 or 7 rows from homeplate (the photo at right is from my cell phone).  It felt almost like being right there on the ball field.  In fact, I was amazed at how different it was than watching the game on TV.  The players weren’t the multimillion dollar stars on the TV screen–they were just a bunch of guys playing baseball.  We could see a lot more of the interaction between the players and umps as it took place across the field.  I also had a much better sense of how each pitch or out or hit effected on the mood of the crowd, and even the players.

I can imagine that the power of the presence of the players and the game would have been even greater if I could have crossed the wall between the stands and the crowd.  The crowd noise was too loud to hear the players or umps talk even from where we were and to them I was just one of 25,000 other fans.  But imagine how the dynamic would change to pass through that wall and be right there on the field interacting with the players and the umps.

The whole thing made me think of teaching students in Banská Bystrica from here in the States.  I’ve certainly come to recognize the power of presence through that experience as well.  The dynamic of the interaction is much different when I teach over the computer with nothing but my voice coming out of their computer speakers.  I tend to rely a lot on involving students in the discussion.  But without my actual presence there’s not much incentive on their part to step out and take part in the discussion.  I also find that I need to spend a lot more time making comments on the work they turn in so that I can give them feedback that would be much easier to give in a one on one situation.  Plus I have to carefully craft the words in order to instruct without criticizing.

My class rotation is such that I don’t teach any classes in the fall.  In the spring I teach 2 sections of my two courses.  I teach OT Background to first year students and Introduction to the OT to second year students.  If we’re able to return to Slovakia next year, the students I have for OT background this year will be my Intro to the OT students when we return to Slovakia next year.  I’m sure looking forward to that.