You are here: Home / family / Missed the Boat 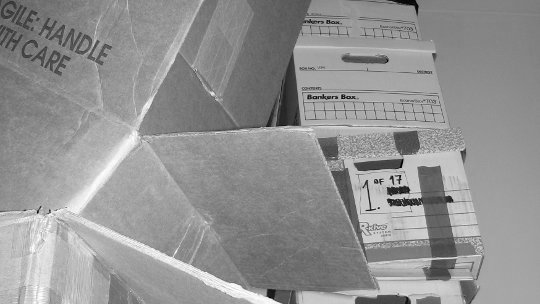 On June 7 my dad and I packed our boxes of belongings into his horse trailer (power washed) and dropped them off at Perfect Express by the airport in Chicago.

In early July I received an email from Perfect Express that our belongings should arrive in Bratislava on July 13. On schedule.

I was told to contact an agent in Bratislava that would help us get our goods through customs. I did, and I received this response from him…

docs well received.
but as far as I am informed, the shipment will sail from New York on 15 July only

It turns out that due to an accounting error our belongings missed the boat and so they didn’t even leave the States until we had been in Slovakia for five weeks. They are now due to arrive on August 3.

It sounds kind of bad. We’ve been living out of suitcases for six weeks, staying in a spare room at the home of Jana’s brother and his family. But in fact it’s been great. We’ve had the chance to get to know Slavo and Martina much better. Plus our kids are nearly the same age as theirs. They have a son Natanael who is one year older than Elisabeth and a son Timotej who is 6 days older than Max (they had the same due date).

Also, the apartment we were hoping to move in to became available at the beginning of July. We’re still not ready to move in, though, because of repairs and some minor remodeling. As it turns out, we’ll be ready to move our stuff in right about the time our boat finally comes in.

In the end, everything is working out perfectly. In fact, even though I was expecting our stuff to come to Bratislava (three hours away), it looks like it will get shipped all the way to Banská Bystrica.