Most people know that Max gets on his kicks. And when he does, he becomes a fanatic. Way back when it was The Wiggles and the guitar, then it was cowboys, then trains, then dinosaurs, then trains again, then monkeys, then Star Wars. Star Wars was a long time–too long. But then he got back into monkeys and monkeys is associated with climbing.

And man! Can he climb. 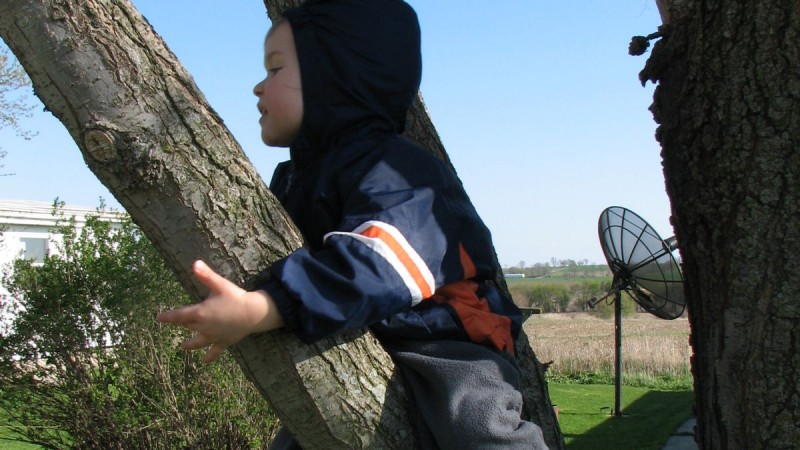 When some of his friends’ parents see Max climb up the doorway they say, “Oh yeah, we used to do that all the time when we were kids.” But then when he’s at the top of the door and climbs over to the next doorway and then disappears into the room and you find him on top of the Finnish fireplace, then they say, “Uuh–we didn’t do that when we were kids.”

Narnia has an afternoon sports program they call “the Narnia Pentathlon.” In September and October they swim, in November and December indoor climbing wall, January and February skiing, March and April swimming, and May and June horseback riding and archery. This year after their first session of the climbing wall the instructor came up to me and said

I kind of nodded and she said,

“If that boy trained he could be the Slovak champion.”

Then I kind of laughed and she said, “I’m serious, at least the Slovak champion!”

Since then we’ve picked up some materials on climbing clubs but we’re not sure about watching our son hang by two fingers from a sheer cliff 200m in the air.

For now, enjoy this climbing song called Badadubim that Max wrote for me on father’s day when he was about four. The best part is at the very end.